Woodwasps are large insects, usually 1 to 1.5 inches long. Adult wasps have four, clear, yellow membraneous wings and their antennae are entirely black. Males and females have stout, cylindrical bodies with a pointed abdomen. Females also have a spike-like projection on their abdomen which protects their ovipositor. Males have thick, black hind legs and orange/yellow middle segments on their abdomen. Females have reddish-brown legs and a steel-blue body.

See image slideshow above for signs and symptoms.

Sirex woodwasp, Sirex noctilio, is an exotic wood-boring insect native to Europe, Asia, and northern Africa. This insect has been the most common species of exotic woodwasp detected at United States ports-of-entry associated with solid wood packing materials. Recent detections of Sirex woodwasp outside of port areas in the United States have raised concerns because this insect has the potential to cause significant impacts on southern and western pines. In the northeast, it has most commonly attacked stressed Scots pine and red pine but has infested eastern white pine as well.

Sirex woodwasp was first discovered in the United States in 2002, in Indiana. Based on its native range in Europe and Asia, it could establish itself in any climate zone of North America where pine occurs. 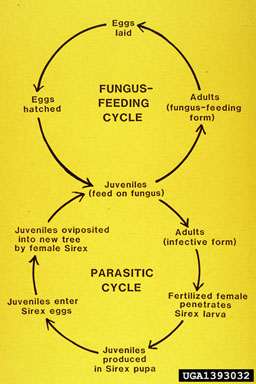 Sirex woodwasp is considered one of the top 10 most serious forest insect pests worldwide. These woodwasps attack living pine trees and, in areas where they have been introduced, have caused extensive losses.

Sirex woodwasp has been confirmed in parts of Vermont.