Emerald ash borer can be confused with many native insects. Check out these native look-alikes.

how to identify an ash tree 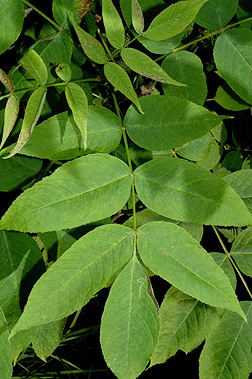 Emerald ash borer (EAB), Agrilus planipennis, is an exotic beetle that was discovered in southeastern Michigan near Detroit in the summer of 2002. The larvae feed in the cambium between the bark and wood, producing S-shaped galleries that girdle and kill branches and trees. Emerald ash borer probably arrived in the United States on solid wood packing material carried in cargo ships or airplanes originating in its native Asia. Learn more on the USDA APHIS story map.

Emerald ash borer feeds and lives in all species of ash and, in some cases, it has been found on white fringetree (Chionanthus virginicus).

The EAB generally has a one-year life cycle and goes through complete metamorphosis.

Adults lay eggs on the bark of the trunk or branches in the summer.

Larvae do their damage to the tree by tunneling in the inner bark and outer wood. This kills the tree by interrupting the flow of food and water. Galleries widen as larvae mature.

Pre-pupae larvae overwinter in shallow chambers in the outer sapwood or in the bark of thick-barked trees.

Pupation begins in late April or May. Adult emergence begins in early June.

5% of Vermont's trees are ash. The majority of ash trees infested with emerald ash borer will die. The emerald ash borer poses a threat to Vermont's economy and ecology. It spreads very quickly, is difficult to detect, and eradication is not expected.

A map of the Emerald ash borer infested area in Vermont can be found here.